Blythe appreciated MINDS’ close involvement in setting up the systems, and considered the company to be “integral” to the success of its new emulsion plant. Eight years later, Blythe is still happy with MINDS software and would use it on any system going forward. 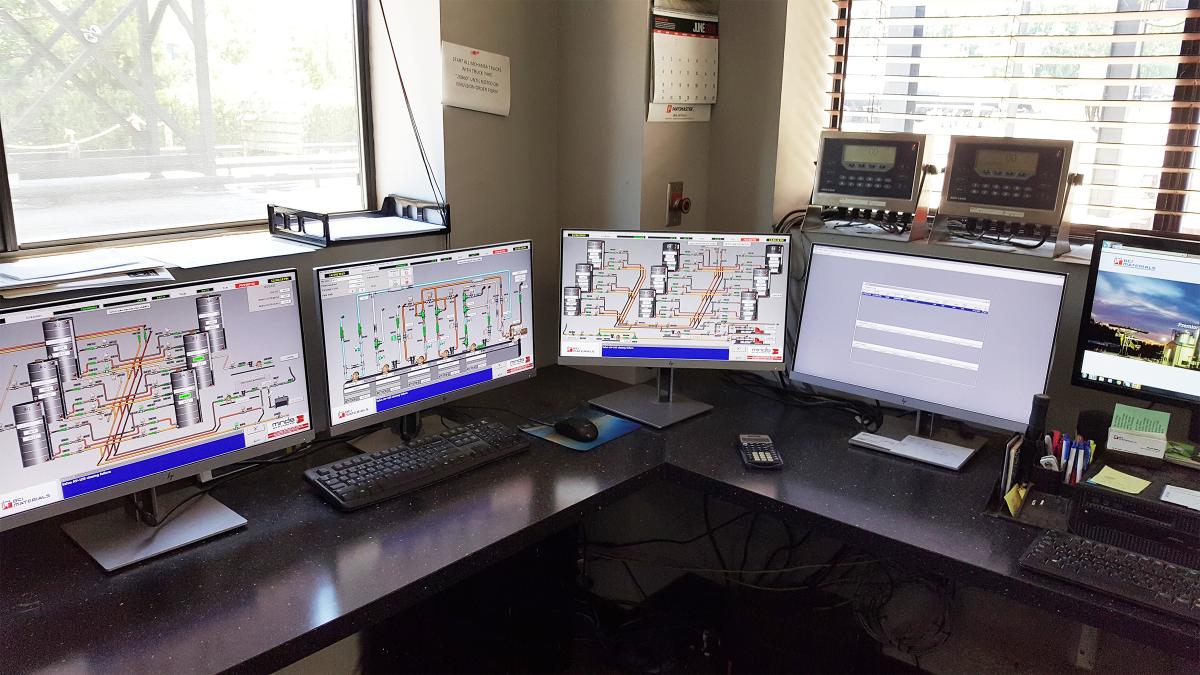 In early 2011, Blythe Construction opened its first-ever emulsion plant in the United States. The company, a Charlotte, North Carolina-based construction firm and subsidiary of the Hubbard Group of Companies, needed the plant to support its paving operations. Blythe turned to MINDS to deliver a plant automation solution for its mix controls and software to handle its loadout and ticketing needs.

MINDS installed its EmulTronic plant control system, a Windows-based automation solution for emulsion and modified bitumen plants. EmulTronic is based on the same platform as MINDS’ other asphalt plant automation systems, DrumTronic and BatchTronic, and can control all the phases of the emulsion or modified bitumen manufacturing process, including the unloading of trucks carrying raw materials, mixing and blending, storing and heating.

MINDS worked closely with Blythe to design a system that was fully integrated with the new plant. The system has four display monitors that operators can review: the first screen shows operators the status of the emulsion tanks and related equipment; the second displays any production-related information that they need, such as the state of aqueous and anhydrous phases; the third shows bitumen tanks and related equipment; and the fourth is the ticketing and loadout display.

Like MINDS’ other asphalt plant software, EmulTronic is a highly visual system, designed to be easy for operators to understand. The process is controlled on the screen only, and both the continuous and discontinuous processes are able to be controlled with software that displays 3D graphics of the plant.

“MINDS designed graphics for the system off of P&ID drawings, and the graphics were spot on,” said Randy Turner, Blythe’s emulsions plant foreman.

“When they downloaded the graphics into the system they pretty much matched the actual physical piping in the plant.”

Turner said he appreciates the valve graphics, which are colour-coded depending on their status, making it intuitive for operators to understand.

EmulTronic’s many levels of safety features were also integrated into the plant to prevent pumps being turned on without the operator’s approval and give the operator visual control over the entirety of the operations. Sensors installed on all the tanks and filling devices prevent tanks and trucks from being overfilled.

To address Blythe’s ticketing and loadout needs, MINDS installed its Tessera software, which can be integrated with production management software such as EmulTronic, BatchTronic and DrumTronic. Tessera was integrated with Blythe’s controls to allow Blythe staff to print tickets after material was loaded onto a truck.

The ticketing system allows users to print tickets and invoices easily and to store information on customers, haulers, jobs, materials and trucks. Creating a new ticket is a simple process: the operator only needs to select the customer, job, and/or material, and the relevant ticketing information automatically populates onto the form. Tessera also handles material pricing, unit conversions, tax calculations and more.

The Tessera software is built on the MySQL database management system, a standard for the industry, and integrated seamlessly with Blythe’s SAP enterprise software. MINDS’ modular add-on architecture allowed Blythe to customize its import and export functions to accommodate adding or exporting data into or out of the system.

Turner said he appreciates the work MINDS put in on adding conversions to their systems that Blythe needed. As the density of emulsion changes from batch to batch, Blythe needed to choose a specific gravity that would work on every batch. “There’s a lot of conversions that we do from tons to gallons and they had to do that for all the chemicals and raw materials,” Turner said. “On the Tessera system, they also had to convert specific gravity over to volume, and they did a tremendous job doing that for us.”

Rick Owens, Blythe’s former emulsion manager, said MINDS’ solutions played a big role in the success of the company’s new plant. “MINDS was an integral part of this project from the beginning,” he said. “Without the close support from the MINDS team, we wouldn’t have been able to accomplish this.”

Eight years later, Turner said the company is extremely satisfied with the software, and appreciates MINDS’ excellent customer service. “They take care of my issues right away, the response we get from them is great. They log on, find the issue, take care of it right then,” he says. “But we have very little issues.”

Blythe also had MINDS install another system for them, Turner said. The system, only used during extremely busy times on the loadout side, is a copy of the ticketing monitor and the loadout screen, which allows one operator to run the plant as normal while another can handle all loadout functions. “They did that for us and we’ve only used it a few times, that was a special request that they came up with for us,” Turner said. “Their ability to take your needs and actually deliver it to you is just tremendous.”

“They’re great systems, I would use them again and I’d put it in another plant if we had one,” he added.

Stop losing time and money on inefficient plant control systems. MINDS’ suite of automation control and data management systems simplify and improve plant management for the asphalt industry. Contact us at 1-866-505-8893 or visit our website to learn more.